Ian will talk about his latest projects and how drawing is its main driving force.

His work reinterprets manmade structures as monuments placed within the landscape acting as architectural metaphors of past and current technological achievements.

Ian has had a longstanding fascination with technology and architectural forms, these have included structures within industry, agriculture, science and the military.

These in the past have included Goonhilly Earth station, The Lovell Telescope, The  Maunsell Sea Forts and the Acoustic Sound.

Ian’s most recent body of work deals with “The Atlantic wall “the WWII German defence system built along the west coast of Europe. These brutalist forms are being interpreted as architectural metaphors concerning boundaries and borders, 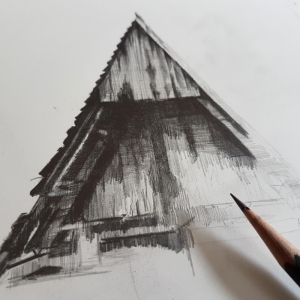