This show is about collaboration, collaboration with the past, the ancient and the dead.  To look back as a catalyst for transformation of the present, and to honour what has gone before.

It was born out of cross disciplinary research with a paleobiologist at Bristol University.  When the first lockdown was announced I was forced back to the roots of my practice, with no access to studio equipment.  I began to adapt and utilise what I had.  Research, contemplation and discussions were all readily accessible, as was printing by hand without the use of a press.

So it was, that in this period of great change I looked for solace in the cycles of time beyond the human experience.

During this investigation I experimented with producing a pigment from a 200 million year old Jurassic squid fossil. It was possible to extract and rehydrate the ink sac. This reanimation of the past had a profound effect on me, as well as my practice.  As I completed a triptych of works that used the ink to depict the Alps, I realised I was collaborating with the landscape itself, for the landscape had produced and preserved the fossil that created the ink. This focus on deep time through geological cycles rather than human ones helped me deal with accepting change in the present.

During this process it appeared to me that the fossil was a form of printmaking itself.  An imprint in time left behind through the act of pressure and release.  The work led me to research the use of other ancient materials and pigments, and the study of living forms that connect us to our ancient past.

Matthew’s work is about deep time and space, explored through the past, the wild and the remote.  He has printed with inks that he rehydrated from 200 million year old fossils.  He sees his work as collaboration with the past, and with the ancient materials he is working with.  Matthew’s practice begins with an experimental approach to relief printmaking, specialising in woodblock, printing predominantly by hand without the use of a press.

After graduating in 2021 Matthew was awarded the Peter Reddick bursary for Innovation in Relief Printmaking at Spike Print Studio. He was also awarded the Printmaking Today prize at the Woolwich Contemporary Print Fair.  He was selected as 1 of 15 UK artists to represent the visual arts in the PORTAL exhibition for postgraduates.  He has been published in Printmaking Today & The California Printmaker. 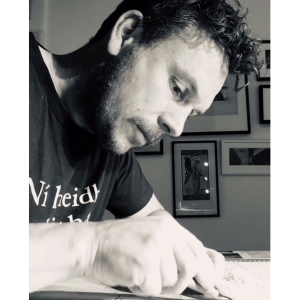 Next post
Exhibition: Alone Together – A Spectrum from Isolation to Solitude by SPIKED