We warmly invite you to our Open Day on Sat 7 June 12-4pm where you will be able to find out about our new initiative, Print Club, Bristol and about our Learning Programme.  Artists’ portfolios 2-4pm  martine baldwin, john lynch, paul laidler, charlotte farmer, ashley thomas, clare cutts, chitra merchant & francisco garnica    PRINT CLUB […] 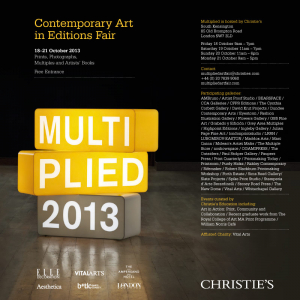 Spike Print Studio will be at Multiplied Art Fair this year. This is incredibly exciting – Multiplied is one of the most high-profile print shows in Britain.

Swansea Print Workshop hosted 3 artists in residence during 2012 and Spike Print Studio is showing the resulting touring exhibition  Drawn to Print.    AOFI LAYTON MATRIACH IPAD DRAWING 2012 FIONA KELLY  THE ABODE ETCHED LINOBLOCK ROS FORD THE VETCH ETCHING We will have the following demos which will definitely be worth seeing: SATURDAY 29th […]

The Open weekend is a great opportunity to see what we do!  Selected members’ work will be exhibited alongside the work of our 2012 Lark Trust Bursary Award artist, John Lynch.   He will guide you through his work in progress with forensic precision. You will be able to buy framed & unframed work, artist books, […]

This year at the Spike Island Open, Spike Print Studio is holding a raffle to raise funds to improve the etching studio equipment which will benefit the learning programme, members and studio users.  The draw will take place at 4pm on Monday 6 May in the studio. Tickets are £1 and the prizes are as […]

Saturday 23 March 11-1pm £3/ free to members   Melissa Gordon is collaborating with Spike Print Studio throughout March to produce a new body of work for a solo exhibition at Spike Island this summer. In this talk she introduces her practice, including the Structure Paintings series, works on canvas that are based on newspaper […]

Spike Print Studio was very pleased to award John Lynch the  Peter Reddick Bursary Award from the Lark Trust, Bristol.  See what he says below: http://jjlynch.org/ Peter Reddick (1924-2010) was one of the co-founders of Spike Print in Bristol. His work shows intricate wood engravings with flowing effortless lines. He was a big part in […]

From the 10th November, the RWA hosts our  festive pop-up shop on the ground floor including an exhibition in Papadeli of selected limited edition prints. Featuring original prints by many of Spike Print Studio’s artists including screenprints by Simon Tozer, Chitra Merchant and Anna Harley and Jane Ormes plus beautiful wood engraving prints by Christine […]