Last March, the first lockdown was a very unusual phenomenon. It was almost unbelievable. Gradually there was an adjustment to new rules and a new way of living. With everything shut, one place I could go to was the allotment and I spent a great deal of time there, planting, digging and also watching the foxes and their young. All holidays were cancelled, and so I looked back at some of the places visited in recent years. One of my favourites was the estuary at Budleigh Salterton in Devon. Another was a walk in Malham, Yorkshire which leads up to a limestone pavement. Recently I’ve been interested in woodcuts and I decided to do two woodcuts of these two subjects. The woodcut of Budleigh was only the second I had ever done, and I cut away too much. 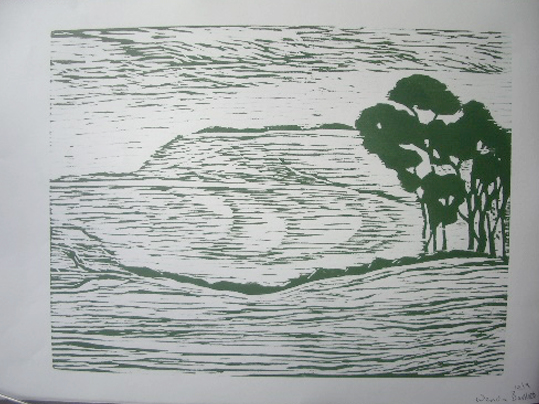 The solution was to do a lino cut and superimpose the two. However a challenge was how to get the red cliffs in the distance in the picture when warm colours should be near and cold ones in the distance? In the end I completed a four colour lino cut by blocking out sections and rolling red earth colour to the front of the picture to balance it. After this had dried I printed the woodcut on top of it. However, one colour was too dark, so I rolled a grey blue on the sky and dark green on the foreground, two colours on the same roller! In the end I achieved a print, which was more complicated than the picture itself looks! 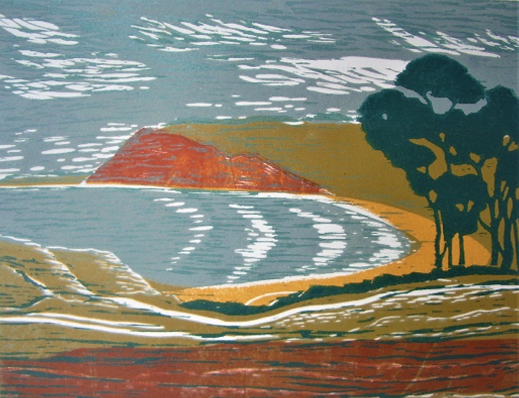 The second woodcut was more straightforward in that I remembered not to cut away too much. I wanted to get the effect of the deep fissures in the limestone rocks and the vastness of the landscape. I produced a first cut, and decided to use a green grey. Blue looked too cold. With lockdown, there seemed to be more time to explore and I made quite a lot of prints looking at effects of different colours. Although the real colours were brown and green, this didn’t look right, so I opted for several shades of green and a deep purple. 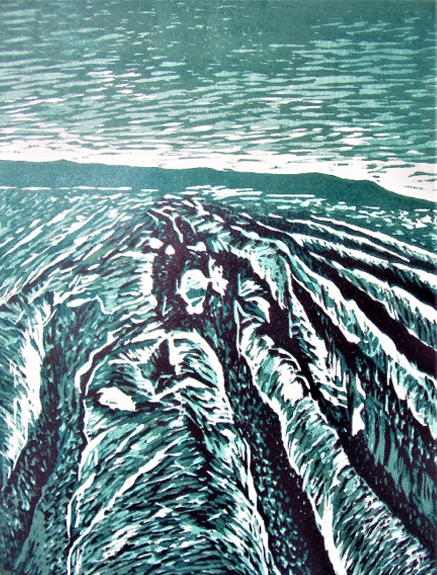 Finally, I’ve always taken pictures of wildlife on the allotment and in the garden. This year there have been more opportunities because of being around the house. Robins and blackbirds are very friendly and demanding, waiting for some food. One day a three month fox cub didn’t seem able to get out of the garden. She spent a couple of days sleeping in the garden, and I contacted an org, which would give her some treatment. She seemed to be quite small for her age. However during this time she came into the house and slept in the kitchen. I have photos and sketches, which I hope to turn into artwork. She was collected and taken to a wildlife centre as her sibling group had disowned her, where she could form a peer group with other abandoned cubs. It was hard to let her go, but it was best for her.